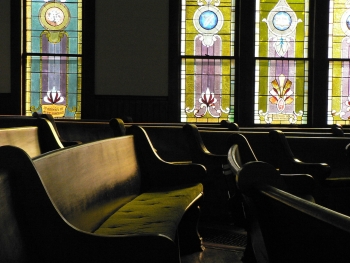 My mother had a penchant for the underdog. She could also look profoundly glamourous when she wanted to, but mostly she wore brown rubber flip flops and a pair of my father's green plaid shorts that hit her just above the knee.  She said they were the most comfortable thing she owned.  Often I'd come home from school, and there she sat swinging her slender, bare leg back and forth, the worn flip flop dangling off her bony but dainty foot.  "Put your books down," she'd say.  "We're going to see the couple who visited us at church last Sunday."  At that point, even at eight, I'd feel ambivalent.  My mother had a habit of just popping in on people.  Sometimes I'd feel embarassed, because I could sense discomfort when they stood in their doorways trying to hide the fact that the living room was a trainwreck.  But my mother in her shorts and bright smile would say, "We were just so happy to see you last week at church.  So glad you came.  Just wanted to welcome you and invite you back."  And almost a hundred percent of the time, those surprised folks would invite us in and offer us a glass of iced tea.  Maybe it was the fact that my mother looked so unassuming wearing men's shorts and holding her little girl's chubby hand.

But then my mother could be exasperating too.  She often told me, "You need to do something with that hair." Or when I complained about not having new clothes, she'd say, "You can only wear one outfit at a time."  She put Vienna Sausage and mayo sandwiches in my lunch.  Spam was a staple in her cupboard.  When I was a teenager, she'd shake her head and say wistfully, "Youth is wasted on the young."  She yelled at my grandmother (her mother) and drank instant coffee. She watched As the World Turns every single day.

I'll never forget one Sunday, though, the Sunday after Thanksgiving--back in the sixties.  Our family was staunchly Presbyterian, and we rarely missed a Sunday.  We usually sat on the same pew each week.  In those days, women and little girls wore white gloves. On Sundays my mother looked glamorous.  No more plaid shorts.  She'd brush her auburn hair until it shone.  She wore bright lipstick and high heels. Her eyes were emerald-green slivers beneath sunglasses she slipped on as she drove the silver-blue Ford Fairlane to the church to give thanks for all our plenty during that holiday season.

As we sat down in the pew, a family my mother and I had visited a few weeks prior sat in front of us.  I could remember that after we visited them I'd remarked to my mother that their house smelled really awful, and when the lady of the house kissed my cheek as we said good-bye, her breath was sour.  My mother replied, "Well, sometimes you just don't know what people are going through; it's best we show them the love of God and overlook the smells."  When I saw this family, I was not thrilled.  And then to my shock, I noted a shiny cockroach crawl from underneath the husband's coat collar.  My mother saw it too, because she leaned forward, put her gloved hand on the man's shoulder and casually brushed the insect off his coat.  As she bent and whispered in his ear, "So happy you could join us today,"  I watched that vile creature scurry down the pew and into the shadows.

I will always love my late mother for that act of kindness.  And I remember her this Thanksgiving. I can just see her stuffing the turkey dressed in my father's shorts.  Then she'd say, "I'm off to change."  And sure enough, she'd come back from the bedroom transformed, there in her shirtwaist dress, pearls at her neck, smiling.  Like Donna Reed.

Tweet
Published in 2015
More in this category: « Whispers of Narnia Cutting Through Pandemonium And The Prince of Wholeness »
back to top