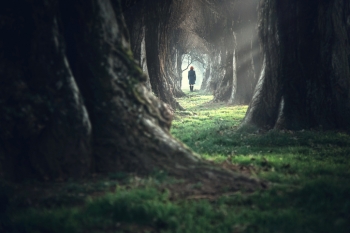 I know a lot about pain, about the ways in which pain is tied to loss. But I also know something less commonly understood: that change and loss travel together. We can't have change without loss, which is why so often people say they want change but nonetheless stay exactly the same.~Lori Gottlieb (From Maybe You Should Talk To Someone)

Change. As a world, during COVID we're all dealing with imposed revisions, and still tasked to manage everyday life.

This week I read a poem once again that we Americans all know from ninth grade English: The Road Not Taken by Robert Frost. (I write it here for your recollection):

And sorry I could not travel both

And be one traveler, long I stood

And looked down one as far as I could

To where it bent in the undergrowth;

Then took the other, as just as fair,

And having perhaps the better claim,

Because it was grassy and wanted wear;

Though as for that the passing there

Had worn them really about the same,

And both that morning equally lay

In leaves no step had trodden black.

Oh, I kept the first for another day!

Yet knowing how way leads on to way,

I doubted if I should ever come back.

I shall be telling this with a sigh

Two roads diverged in a wood, and I--

I took the one less traveled by,

And that has made all the difference.

Sometimes I've thought that the road Frost decided to take was somehow "the better choice." But as I contemplate the poem now having lived a few decades, I understand that roads not taken are perhaps just as good, really. Maybe even easier. Or even better. Frost states the road he did not choose was "just as fair" and he longed to travel both.

We can't simultaneously take both roads. Though we try in this world of FOMO (fear of missing out). Perhaps the Pandemic is providing us more opportunity for interior exploration and adventure. Perhaps the mandated pause gives us increased margin to ponder change. To ponder choices.  I'm asking myself some questions about divergent roads I face now...

How do I remain open to change?

Where do crossing the borders of my vulnerability take me?

Am I brave enough to make changes and risk loss of the familiar?

We never really know for sure what destinations roads not taken may have yielded. But destination is not necessairly the most crucial focal point. The heart of the matter is the journey, the pilgrimage, the assurance of God's grace and guidance along the way.

Tweet
Published in 2020
More in this category: « I Expected Red Roses Unlearning Anxiety And A Short Story »
back to top