Teetering On The Edge Of Endings 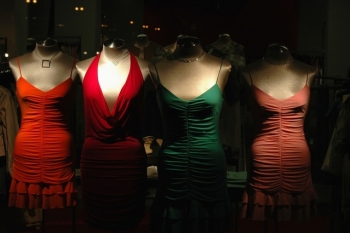 Already, in just a week, I'd lost steam, lost enthusiasm for the new beginning that January can offer as the seasons tick by.  My cold symptoms had worsened.  I couldn't stop coughing.  I couldn't sleep.  I'd missed three days of work.  The doctor pronounced severe bronchitis.  "We've been seeing so much of this.  Expect the cough to linger for a few weeks," he said, as he wrote me a plethora of prescriptions.  I knew I did not want to be sucked into the frigid maelstrom of negativity, self-pity and overwhelm.  It was tempting.  I prayed, "God give me a dream--something--to calibrate my perspective, to regulate my emotions."

In the dream,I seemed to be magnetized to a clothing store in a trendy mall, its color palette a soothing blend of grays and turquoise.  The name of the store was W.E. (this stood for World's End).  I was at once captivated by an array of finely-made clothing hanging in artistic displays.  A crowd of women perused the gorgeous clothing.  I was about to join them, when a sales clerk greeted me.  Her brown eyes sparkled as she said, "I've got the perfect styles for you.  Give me a minute to select them, and I'll bring them right out."  She vanished behind a curtain.  Her bright smile seemed to leave a trail of glitter as she turned on her heel.  I inhaled and noted the store smelled of eucalyptus, yet I felt strangely wary of the atmosphere.  Almost too perfect.

The woman returned and placed several outfits on a rack.  I glanced at the price tags.  Expensive, silky fabric.  I could tell the garments would fit me perfectly.  Each piece of clothing was based on a Christmas theme--red, gold, green, silver.  I simultaneously hated and loved the pieces.  Christmas was over, yet they were so pretty.  The salesperson beamed, "Don't you just love what I've chosen for you?"  Somehow I felt as if I teetered on an edge of endings.  I'd celebrated Christmas.  I didn't want to go backward, although there was an inclination to do so--to overspend and buy the clothing, and then join the crowd of women vying for the dresses on display. To stay in that store, just because it was beautiful and expensive, its fragrance intoxicating.  My ambivalence was almost palpable.  I declared, "I want to move forward.  I don't want to be in a store named "World's End."  I could almost see the the woman's cherry-colored lips formed in an "O" of surpise as I ran out of the store.