My hope is to offer encouragement to writers as well as to those who simply love to read. You will find snippets of things I am working on and special announcements here as well. 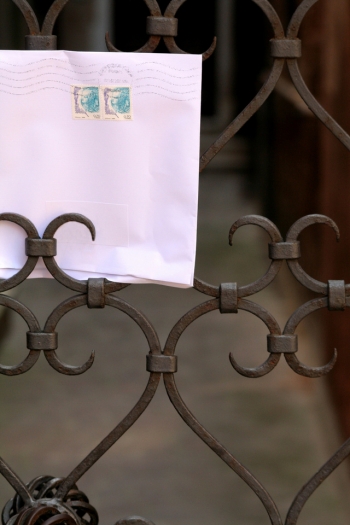 I remember as a girl waiting on the porch for the postman.  He carried a leather bag strapped across his body and walked through my neighborhood delivering handfuls of missives.  Almost every day a letter came from my grandmother or aunt or cousin.  And I can still see my father pulling out sheets of plain white paper from his desk drawer in the evenings.  He might write five or six letters in one sitting--and not just a line or two.  He created letters two and three pages long.  The envelopes sat stacked up in the entry way to be clipped to the mailbox with a wooden clothespin the next morning, ready to go out with the jolly mailman.

And in college there was nothing more exhilarating than twirling the combination lock on the post office box, pulling open that enclosure to discover a letter from Giovanni, the stamps from Italy pastel green or pink or lavender, exotic.  The letters felt alive in my hands, breathing love, a feast for my heart.  I still have those letters.  My mother saved them for me.  And every now and then I go back to that ancient bundle, still a banquet, the ink indelible, memorable.

The Fragrance Of LIght 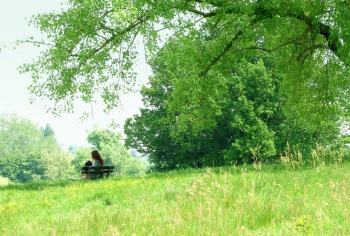 This week I'm experimenting.  I created a short-story.  Only my second.  Let me know what you think.  And once again let me say how much I appreciate your faithfulness.  Humble thanks, gentle readers.

He knows crestfallen. He doesn't need a mirror to know that life is different now.  He is no longer one of the beloved whose pores secrete irresistibility.  Now he can’t look at someone and let the color of his eyes do all the work.  He is no longer enchanting—no longer pursued.  And he is not old.

At fourteen, the neighbor girl said one day, “, this time next year, we won’t be together. I’m not pretty enough.”

“What?” he’d sputtered.  “Get out.”  But inside he knew.  He already knew that he was one of the lucky ones.  He could toss his head and the hair appeared to ripple and fall in place.  His teeth reflected orthodontic good fortune, and the empathic gods had spared his face—no acne constellations.  He possessed scarlet lips.

Cameron no longer made eye contact with the neighbor girl, the prophetess.  She’d vanished.  And she knew to avoid him. She knew her place.

At twenty-two he is lean, sporting well-defined biceps that can be described as practically magnificent.  And sometimes in photos, if he’s in profile, you can’t tell, can’t see that one side of his face is destroyed, ugly with raised pink welts. Seared.

She’d heard about the accident—that awful car crash when he’d been drinking, the summer after graduation.  It seemed a miracle he didn’t have more injuries, that he hadn't been killed. He'd been in the hospital for weeks.  Everyone said he'd gone into seclusion.  He didn't go to college.  He didn't work  She hadn't seen him since that day at Baskin Robbins where she'd been scooping ice cream.  He'd winked at her when she handed him a cone of Rocky Road, a tanned, curvy cheerleader hanging all over him.

She’d known, even at seven, when they were inseperable, she wasn’t like him.  Whenever they played at the park, strangers would pat Cameron's head and murmur, “What a cutie you are.”  No one said things like that to her.  She’d tolerated being invisible.  He told her one day when they sat atop a tree they’d climbed as ten-year-olds, “Madeline, don’t tell my mom we climbed up here today. She’d be mad.  I’m not supposed to go this far.”

“I won’t.”  They'd high-fived.  She remembered the sting on her palm and the sound of the leaves. 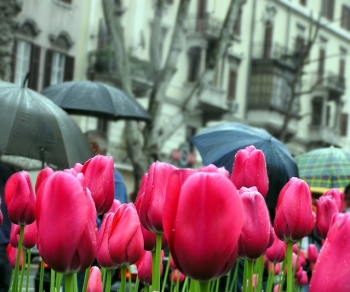 I used the word "imperceptible" to describe myself.  During a writing workshop the instructor provided several prompts.  I chose When I'm imperfect...

What followed included a piece written about my discovery of a minuscule eggshell--or the piece of one.  The fragile shard lay hidden in a pile of mown grass debris left by the side of the road.  I saw its cracked edges peering from the yellowing mound, brushed it off and placed it on my palm so that I could get a better look.  It was delicate--faint crack marks etched inside the broken shell.  A bird must have struggled with some difficulty to break free.

As my piece was "workshopped," (a verb used to describe other writers providing gentle, productive feedback) one of the comments came from the instructor.  "I think there may be a certain assertiveness missing here.  Sometimes when there is a slightly tentative voice, the writer connotes some hesitation, some self doubt, and the reader picks up on that.  You may want to consider increasing your assertiveness."  This feedback rang true. I can be dangerously passive.  There is a part of me that desires to stay small, yet paradoxically wants to be heard, wants others to read my work. Yet I often believe my work is not worth reading.

I wrote, "The shell is me too--imperfect, cracked, stained--almost imperceptible...and I don't know where the other half of this shell lies, either.  I think I keep searching for it, perhaps with the incongruous hope that I can crawl back in, patch things up a bit and stay safe.  Incubate."

A Sapphire Pathway And Superlative Mercies 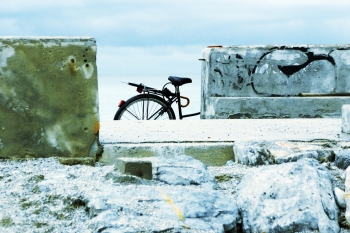 I'm in that stuck place.  Metaphorically speaking, I've ridden my bike to the coast, the warmth and salty sea beckoning me, the pastel blue waves lapping, speaking.  Yet I can't pedal anymore.  I'm weak. I'm inadequate. I'm vulnerable. I'm staring ahead at a concrete block where I'm parked, another gray block at my back.  This stuck place offers no movement.

Life feels too hard--my job a wet blanket I can't shake off one more time.  I let the smotherng weight of it rest on my shoulders, clammy and uncomfortable. Heavy.

Daily life is expensive.  The car needs work. That much?  Really?

The gray already showing in my hair?   No, I can't have the gray.  There are children starving.  I am too vain.  But I go ahead and dish out the money--relieved that I look better--at least to me.

A notice in the mail.  Your mammogram is past due.  It's been a year?

And the roof.  Yes, that's in need of replacement.  Nineteen years already?

And the financial guy--"You really need to save more.  Retirement looms, and you're not near where you should be. Your will needs updating too." Attorney fees.  More money.

And the marriage.  We are quintessential ships passing in the night.  Different schedules.  Different energy levels.  Going through the motions.  Emotionally distant.  "What do you need at Walmart?" "Did you call Pete to get the estimate for the repair?"  A goodnight kiss, a thread of connection.  "I love you," we whisper.  A faint heartbeat.  We long for the weekends.

The Solace Of Imperfection 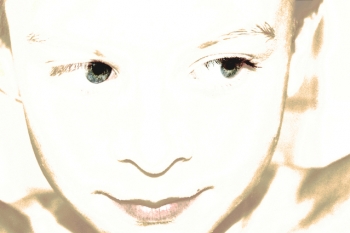 It can happen early--that drive to be perfect. Linear.  Following all the rules.  No mercy.  A good friend told me recently that when she was a young girl, she wore undies embroidered with the days of the week.  She said she felt guilty if she realized she wore Tuesday on Thursday or Monday on Friday--her mind and heart disturbed that she was somehow out of synch--not following the days of the week in perfect order.

We live in a world that often chases the childlikeness out of us.  "Fit in.  Conform.  Stay in the box, please." Yet we know the beauty of a child's attempts at something difficult--when they use what they have--when they do what they can--no obsession with an outcome.  Last week my four-year-old granddaughter sent me a text.  It read: Dady and ie or having fun.  Momo brot sum library buks mabe we kan rede them. Lv lilly. My son-in-law wrote back:  "Lilly wanted to text you, and typed that all out for you with no help from me.  She took the phone and wrote that herself."

When childlikeness surfaces, those faint traces of "I could try that," or "that may be fun," we often turn away thinking, "Who am I kidding?  I don't have what it takes to...go on that trip, draw that image; create that recipe like Martha Stewart would."